After the race we made the usual stop at the beer tent to replenish fluids.

It’s been a couple of years since the last time we sang at the Middleton Good Neighbor Fest, but a couple of us take part in the 5 K race almost every year. This year we were once again just a single Tenor II short of having a quartet.

The race was on Saturday morning August 29th; the rain had stopped by race time, though it did sprinkle a little and there was enough mist that I was glad I remembered to wear my lucky rain hat. After the race, there was the traditional stop at the beer tent to “replenish fluids.” And we all got free peaches. I have no idea why they were giving away peaches, but I was happy to take one.

Paul and Dorothy Hermann came to our rehearsal again on April 30th – they made another trip to Madison for our Spring Concert on May 2. Here are some photos from Dorothy:

We rehearsed in the banquet hall

We rehearsed facing the wall – not a very exciting view of the choir!

Having “refreshments” after rehearsal

At our rehearsal on April 9th, we had some special visitors from Calgary: Paul Hermann and his daughter Dorothy. Paul sang with the Maennerchor while he was in an exchange student at the University back in 1951-52. So he was a part of the choir during the centennial year of 1952.

Here are some photos from the rehearsal on April 9.

Paul (in the NY Yankees ball cap) with the choir

Paul and Dorothy with Joe

Paul and Dorothy with Mel; the photo is of Paul’s German exchange student group

I’ve also posted this on our Facebook page, but in case you didn’t see the article in last Sunday’s Wisconsin State Journal about the brewing program at UW – Madison, click here. The class is taught by MMC member Hans Zoerb.

No singing for us at the Middleton Good Neighbor Fest again this year, but a couple of us took part in the 5 K race. It was a very hot and humid morning, so naturally we were very thirsty when we finished the run. 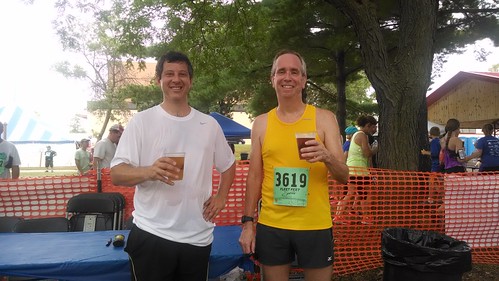 I really like to post sock photos, but every once in a while you get the chance to step outside of the box, so I just had to post this photo of a T-shirt at our rehearsal tonight:

The choir didn’t sing at the Middleton Good Neighbor Fest this year, but several of us took part in the 5 K race. And naturally we had to “replenish fluids” after the race.

We’re looking for a second tenor for next year’s race, to complete the quartet.

Former Madison Maennerchor director Ron Rockow had the opportunity to direct the Mormon Tabernacle Choir at their concert at the Overture Center in Madison on Tuesday June 18, 2013. The Wisconsin State Journal has the full story here. The State Journal also has some photos of the rehearsal and concert.

Service for George Dickinson: Friday, June 1st at 11:00 at the Winn-Cress Funeral Home on 5785 Highway Q in Waunakee. Visitation: 10-11 am, followed by procession to the cemetery and burial with military rights.

Our former comrade in song passed away recently.

His obituary can be found at this link